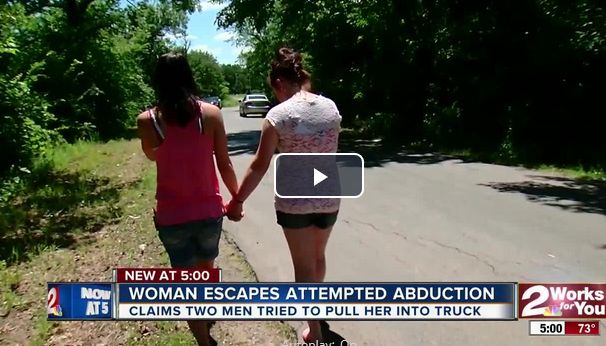 In May of 2017, a woman in Oklahoma successfully fought of two men attempting to abduct her.  She was walking down a familiar road when two men approached her in a truck.  After declining their repeated offers to “give her a ride.”  The men then decided they were going to attempt to abduct her.

This brave young woman, Brittany, decided that she would fight for her life!  She used important information (like we teach in our Modules 3 & 4 classes: Legs and Brains, Claws and Fangs) to escape this attempted abduction.  First, she used her “claws” when she repeatedly scratched the man that had grabbed her.

I think many women “know” they can use their fingernails, but don’t trust that it would be enough.  When Brittany chose to start scratching and gouging her assailant, she didn’t just stop at one scratch.  She used what we teach as Repetitive Response.  In our article, “LabCaF Lessons from a Cat,” you learned that it doesn’t matter how small you are, if you continue to cause pain, the assailant will involuntarily let go of you just to get away from the source of those sharp claws!

The second successful thing she did was to use lessons from our Module 3: Legs and Brains course and hid effectively from her would be abductors.  It is important that once you fight your way out of the fight, you know how to be safe until you can get to a safe place.

We want to congratulate Ms. Mickle for her outstanding bravery, and for deciding, she was worth the fight!  She won, she escaped, she Fought, she Survived, she Thrived!

To read Brittany’s story of survival click this link:

Until next time, remember, “You are Worth the Fight!’