LaBCaF Lessons from a Cat

What do you picture in your mind when I say “kitty?”  Is it cute?  Is it adorable?  Fluffy?  A cuddly purring ball of furry happiness?

What about when I say, “putting your cat in the tub for a bath?”  Still adorable and sweet? Probably not.  How about irritated, determined, razor footed monster, with a mouth full of needle teeth?

Cats really don’t mind letting you know what they think.  This is especially true when they are unhappy, or even worse, afraid and cornered.  The don’t worry about what you might think of them or what names you might call them.  They just want you to leave them alone, NOW!  Most of the time, you don’t even have to try figure out what they want when they’re unhappy.

That is the first lesson I want you take from the world of cats:
When you’re uncomfortable with someone and want them to leave you alone, make it VERY clear for them.  No puzzling or confusing comments.  No sarcasm.  No humor.  No mean words.  Just clarity. 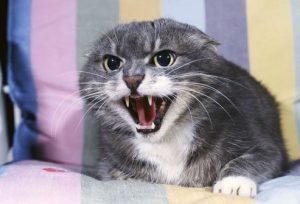 Being clear and loud lets the person you’re speaking to AND those around you know exactly what you want.  The bartender, the bouncer, the store manager, the undercover police, the other women who hate pushy guys, they all become aware of your predicament.  They also become YOUR supporting witnesses.  The “bad guy” needs to be clear that this is not a game of “hard to get.”

Let’s move on to the next lesson.

Even if the cat you are dealing with in your home is one that you serve faithfully with good food, great toys, and furniture to destroy, it still won’t take too much crap from you, right?  And if it’s an unfamiliar cat, woe be unto you for trying to pick it up or even pet it!

But, really, what can they do to you?  I mean their mouths and teeth and even their claws are actually quite tiny.  It’s not like you’re trying to fight off a Siberian tiger, or even a wild ocelot.  They’re not going to bite your arm off.  They’re not going to eat you.  They’re not even going to cause you to bleed very much.  So how is it that they can strike fear into someone and even get that person to drop them IMMEDIATELY?

The scratches and bite marks in this picture won’t need stitches, a tourniquet, or surgery. (A visit to your doctor would still be a good idea!)  But if you’ve ever handled a cat who didn’t want to be handled that cat started making your arms look like that, what did you do?  I’d bet a dollar to a doughnut that you dropped that cat just as quickly as your neurons and muscle fibers would react!  That cat isn’t trying to kill you (although it may want to).  It just wants to get away from you.  It just wants to be away from what it perceives as threatening or dangerous. So, for how long does it keep making those small but painful scratches and bites?  Until it is free!

Regardless of a person’s size or musculature, pain is still registered in the brain as something to get away from.  You may not be able to break the ribs of a person who is either very muscular or even very obese because of the tissue protecting the ribs.  But those same people will register a cat ripping their skin up the same!  It’s why a product like Pepper Spray is so effective, even though it doesn’t actually cause permanent injury.

The application of pain may or may not include causing serious injury to an attacker.  In our Claws and Fangs course you will learn how to do both.  But whether you are able to take our class or not, the truth is this: scratching, biting, gouging, pinching, stomping, and kicking all HURT!  Even if they are not creating permanent injuries, the person on the receiving end will not want to continue “receiving” that pain.  And just like we learned from the cat, how long do you continue doing those things to a bad guy? Until you are free and can escape.

You CAN win.  You CAN escape.  You CAN be victorious, even when the odds seem to be against you!

PS  If you enjoyed this article, please forward it to the friends and family you care about.  They can be safer because of what YOU shared with them!