How to Use Pepper Spray Like a LaBCaF Girl! 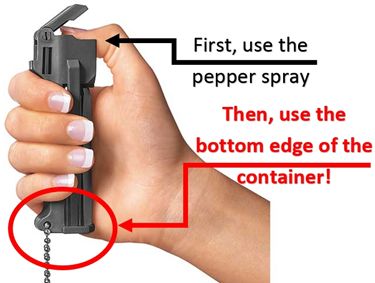 We’ve all heard that the effects of pepper spray are not permanent, right?  We know the burning sensation, the blindness, and the difficulty breathing are all temporary.  We know that pepper spray isn’t meant to permanently injure anyone.

So what IS it for?  It is to redirect an attacker’s attention to the sudden painful effects he is now experiencing due to attacking a woman who is armed with, and willing to spray him with pepper spray.  That takes his attention off you, giving you an opportunity to escape.  I covered how pepper spray works in another article (click HERE) so I won’t cover that part again.  But there is more you can do with it, and that’s what I want to tell you about now.

What we want to happen when we spray a bad guy with pepper spray is that he stops immediately, covers his eyes with his hands, starts choking and gasping, and continues doing that while we leave, find a safe place, and then call 911 for the police to come arrest that jerky jerk criminal. 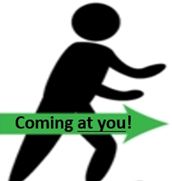 But what if that guy is already moving at you and trying to grab you at the time of your spraying him?  Even if you don’t have a grasp of Newton’s first law of motion or the scientific equation for momentum, you still know this: if something is moving towards you (like a charging bad guy) it will tend to keep moving until something slows it down or stops it.  Even a person who is just walking and suddenly catches their foot on a curb keeps moving forward.  We call that “tripping,” (and it’s usually right in front of a really attractive person or your new boss).  You see, their feet stopped moving, but their body didn’t because of its “momentum.”

The very same thing can happen when you pepper spray someone in the face while they are trying to grab, catch, or tackle you.  Even though their skin is starting to sting and they might not be able to see or breathe, because of their momentum they might still end up grabbing you or running into you.  Now what?

Now some jerk bad guy has his hands on your shoulders, clothes, neck, or whatever he happened to grab with his eyes closed.  Sounds bad, right?  Not for a LaBCaF Girl!  We teach our students to use whatever they have in the most effective way possible. 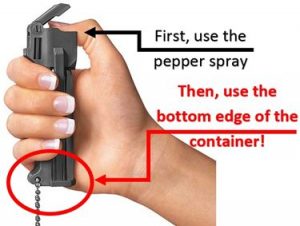 What would a LaBCaF Girl do in this situation?  She would realize that she still has a hard pepper spray canister in her hand that is in the perfect grip to now use as a different kind of self-defense tool.  She would also see the many tender and easily damaged targets on the face of the bad guy holding her.  Then she would start applying the bottom edge of that pepper spray container repeatedly to the nose, mouth, eyes, forehead, temple, and collar bones like she was trying to smash through a block of ice to get the last piece of chocolate on earth!

Now the blind and gasping-for-air bad guy has a brand-new problem: he isn’t just experiencing discomfort, his face and head are being beaten with a metal or hard plastic container by a woman he can’t see.  And a LaBCaF Girl won’t stop hitting him until he releases her!  His body’s survival instinct would be screaming at him to get away from this woman.  Our bodies have a natural response to pain and anything that is causing injury – “GET AWAY FROM IT!” By the way, that natural response is in every creature.  So, whether it is a bad guy or a wild animal, enough pain and injury will cause them to retreat for their survival’s sake.

Sometimes, that takes knowing what a LaBCaF Girl knows!

I hope you’ll come see us.  You can be a LaBCaF Girl too!