What’s so HOT about pepper spray? 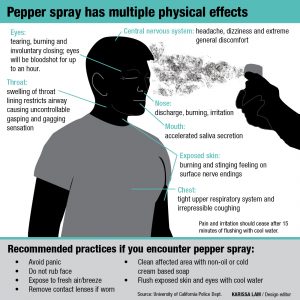 Hey there everybody! I want to tell you a little about Pepper Spray. Some of you might be thinking about carrying it while others of you already have it. Or maybe you don’t really know anything about it and haven’t even given it any thought whatsoever. Regardless of which of those three groups you fall into, you’re about to be a little more informed than you were a few minutes ago!
Check out this article I found about pepper spray on HowStuffWorks

As you know, pepper spray comes from actual peppers. You’ve probably also heard it referred to as OC spray. OC stands for oleoresin capsicum. Usually on the packaging you will see a percentage number that tells you how much of the contents of the container are the actual OC chemicals. Although you may think that the higher the percentage the hotter the spray, but that’s not true.

One of the many brands of Pepper spray

MY EXPERIENCE
I was sprayed directly in the face with a 5% mixture (as part of law enforcement training). I can tell you this: it was horrible! The sprays come in different spray patterns. The most common are a fog and stream patterns (think aerosol hairspray vs. squirt gun). I was sprayed with a stream right across the forehead. Even though the stream didn’t hit me directly in the eyes, my eyes were affected within seconds! The pain is surprisingly intense! In the military, I’ve been exposed to or sprayed with tear gas many MANY times. And I’ll tell you this, I’d rather be sprayed with tear gas any day of the week rather than be sprayed with pepper spray! 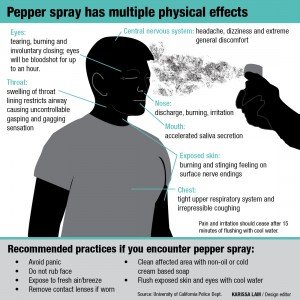 sed to have. So, regardless of how “tough” an assailant may be, he won’t be able to see once he is sprayed with OC. Plus, it will be burning his eyes and causing a lot of tears. On top of that, it causes mucus membranes to become inflamed (think nose, mouth, and throat). That means that not only is the assailant’s nose, mouth, and throat burning, but he is now having a difficult time breathing as his body tries desperately to avoid getting any more OC into his mouth, nose and lungs! As an added bonus, the pepper spray feels like a liquid sunburn on your skin. If an assailant tries to wipe it off, since it is oil based, it just spreads and keeps on burning.

How Far to Spray
Although most pepper spray canisters will spray up to about 8 feet, I would have to say that if a person you’re considering spraying with pepper spray is THAT far away, you shouldn’t be spraying him! If you’re using a “stream” sprayer, it will be tough to aim it that far away.  If you’re using a “fog” sprayer, you are very likely to get pepper spray where you don’t want it ( like on bystanders or on YOURSELF! ). I wouldn’t attempt to spray anyone who couldn’t reach out and touch you.  Remember, you will probably asked about what happened, and spraying someone who wasn’t even close enough to touch you may not look to good for you!
I’ll talk about the pros and cons of “stream” vs “fog” in a later post.